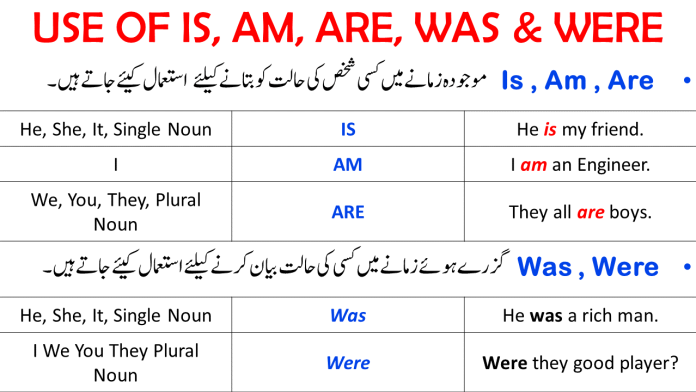 Use Of IS, AM, ARE, WAS, and WERE In English With Urdu Examples

Is am Are,  used as a verb in Sentences that end on ہے،ہوں،ہیں۔

These are Used as:

Use is when the subject is a singular noun or a third-person singular pronoun.

Use are when the subject is a plural noun or a plural pronoun (e.g. we, you, they).

Use am when the subject is the first person pronoun I.

Use of Was Were

Was and were are both past tenses of the verb to be. The verb be is a tricky one because it is an irregular verb and one that we find ourselves using with great frequency, so it is that much more important that we choose the correct verb for our sentences.

English to Urdu Sentences with the use of Is, Am, Are, Was, and Were:

Variations of I’m In/At/On: Usage and Examples In English

ABOUT US
ilmist.com is an educational website,determined to provide you assistance in your journey of learning.You can get English learning material,competitive test preparation material and bundles of PDF books on almost all topics
Contact us: ilmist841@gmail.com
© Newspaper WordPress Theme by TagDiv
MORE STORIES

Variations of I’m In/At/On: Usage and Examples In English